Yeay - Found Another Run in November

Yeay ..... found another race in November 2011. This is so great I am on course. Can't wait to collect my Standard Chartered KL Marathon race kit.

Posted by Suria Zainuddin at 9:18 PM No comments: 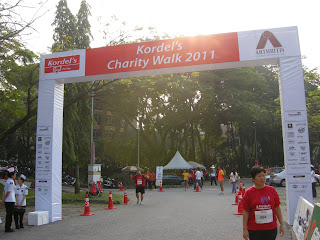 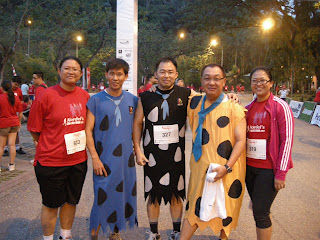 This walk was held on June 12, 2011 at Padang Merbuk (my first time visiting Padang Merbuk which is near Tugu Negara. Anyway basic details of the walk:

We arrive on time, found a cool parking sport very near to the starting line .. yup it was an illegal parking spot but as long as it is not my car I am totally ok with it ..... (sorry Tina). Lepak around the starting line; took some pictures one of them with Fred Flintstone and friends.

Nothing special about the walk. All of us finished the walk, collected our goody bag and went to Park Village for breakfast; where I had Lontong Kerang...yummmyyyy 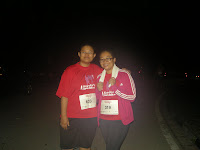 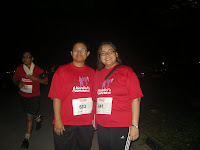 Posted by Suria Zainuddin at 9:11 PM No comments:

As you can see the one in red are the races I have register for. If I ran and finish all the races listed I am still short of 1 race to complete 12 races. Hoping Malakoff KL 2011 is on in December or something come up in September BUT highly unlikely as Raya falls on that month .... sigh .... despair .... so near but still uncertain
Posted by Suria Zainuddin at 8:41 PM No comments: 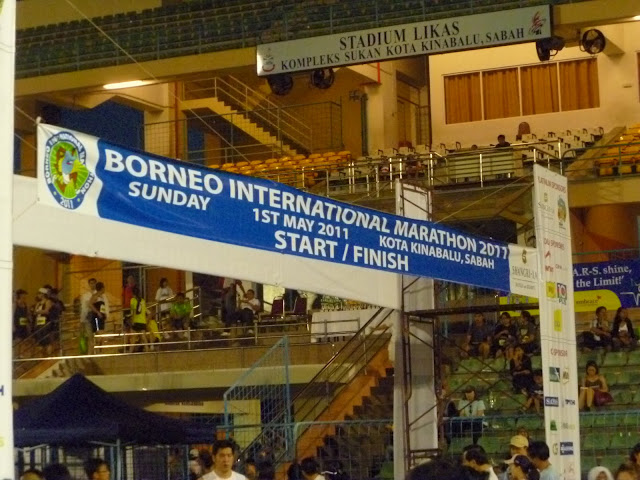 ﻿It was a long weekend since May 1 is Labour day and it fell on Sunday so the public holiday was brought forward to Monday. I took the Friday off and had a four days on that weekend. Pack my bags and my husband and we took a flight to KK for a short getaway. ﻿﻿﻿﻿
I pick up my race kit on Saturday, everything went well no rush no long queue. The race kit consist of a running pouch, 2 packets of energy bar and a voucher for a free Starbuck frappacino grande. The running t-shirt was given only after we finish the race. 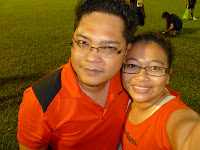 Race Day
﻿﻿﻿﻿﻿﻿We woke up at 5.00am as the race start at 6.30 for the 10k runners. We reached there early and manage to see the 21k runner start their race. There was a lot of runners for the 21k a lot more then the 10k runners. That was a surprise; Do they know they have to run 21 kilometres ???!!
Anyway my race went on smoothly. Nothing special happen, saw a couple of people wearing the Energizer Night Race and the  Bareno Run t-shirts running as well. Waaa they flew all the way down from KL as well so I am not that special sob .... sob ....
﻿﻿﻿﻿﻿﻿﻿﻿﻿﻿﻿﻿﻿﻿﻿﻿﻿﻿﻿﻿﻿﻿﻿﻿﻿﻿﻿﻿﻿﻿﻿﻿﻿
There was 2 runners wearing the Energizer Night Race (I seem obsessed on this race) T-shirt that caught my attention. It was this 2 "warga tua" one a Singh and the other is a Chinese guy running together at their "own pace". It is hard to explain, the Singh guy will be running, the Chinese guy will walk but at a certain distance he will run fast to catch-up with his friend; weird right. Sadly, their pace is faster then my pace so they lost me some where along the way. However, on the way back I saw the old Chinese guy receiving some medical attention so I didn't think he finished the race.

Why this is the best race ?

Seriously I don't know it was just nice; there was a pre-race pasta party for all the race participants organise by the one of the hotel sponsoring the event; lots of station waters, wet cold sponge station, medic station, race marshalls and people supporting the participants. The weather was wonderfully warm and cosy for a run. Just a lot of things bunch into one.
Posted by Suria Zainuddin at 7:33 PM No comments:

I ran this race on April 10, 2011 before the Energizer Night Race. This was my first 10k run. Yup went all the way to London to ran this race, well actually went there to give Angah (aka the Mom) some moral support fo her paper presentation.


The only thing I can say about the run was ...... .. IT WAS COLD..... Even  sweating I was cold, thought I was sweating ice. Angah did not have the same problem as me, probably because Kingston is colder.

Anyway the run was fun, lots of people cheering us on. I thought of writing the pro and cons of running in KL and in London but it is just to much of an effort to think. Anyway some of the key points probably, KL I can  run all year round, KL nicer weather to run but limited time coz you don't want to run at 12 noon. But then London have more places to run and it just seem to be safer to run even in the city. Well you can't have everything :-)

Suria Zainuddin
This year I decided to be a runner