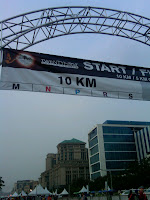 BSN Putrajaya Night Raya organizer should held their head high as it is very well organised (as far as Tina and I am concerned anyway). Before I jumped ahead a brief details of my run are as follow:
Run Name : BSN Putrajaya Night Race
Date : 15th October 2011
Time : 8.40
Distance Ran : 10km

Running Buddy : Tina , although ZCAT was there did not manage to see him as this time around we went on separate cars 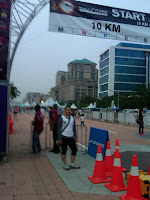 As earlier mention the race was organise smoothly , BSN as first time sponsor should be proud of themselves . They really make sure everything went well. Things the made the race an A+ in my book was:

Race Location & General Logistics
The race location was in Putrajaya, this is not the first race I joined that was held here but somehow the organizer took the extra effort to ensure everything is well coordinated. There was RELA assisting / directing us on where to park and they where also accordingly placed on roads that were closed just to make sure no one remove the cones placed there. Yes, people this does happened before.

Forgot to mention parking was free. 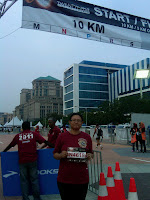 Luggage Keeping Facilities
Although it was a bit further down than where all the activities where taken place, I think it is a bit more secure as there was no crowd at the location and the person in charge can focus and not be distracted. They also decided to segregate the booth according to the distance you run so there was no queue when I went to send and retrieve my bag.
Water
The was lots of water. They gave mineral water bottles both before and after the race. The during the race there was 3 water stations; normaly they put only 2 water stations even though sometimes they advertise 3 . Feel so cheated when that happened. 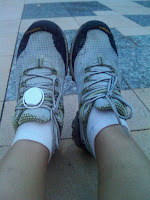 They started the race with fireworks how awesome is that ... not much can goes wrong in event if you got fireworks :-)
Anyway along the way again strategically placed cheer team. The first cheer group encounter was probably; if not mostly BSN workers. Don't know if it was volunteer or instructed but they all were such good sport cheering us on going up the hill. Then there was the marching band; loud speaker was place in some location blasting songs and some tradisional indian drums was played. It was all  good 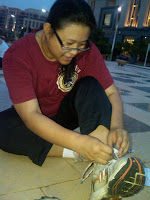 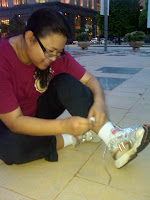 At the end of the race they gave us packet  food; currypuff and remember anything else.
Anyway Tina finish 1hr 43 min this is a huge improvement from her last race which was 1hr 55min. I did not improve as much my last race was 1hr 33min and this time I clock in 1hr 31min. Hope next time I can clock in 1hr 25+ish min.
Posted by Suria Zainuddin at 2:22 AM No comments:

Event Name: PIKOM Charity Run 2011
Distance: 6km
Running Buddy: Adzman aka ZCAT, Yana was suppose to join us but her alarm clock fail her that morning as for Tina her class schedule clashes with the running date. No worries ALL the afore mention running buddies will be running for the BSN-Putrajaya Night Race this coming Saturday (15/10/2011) and the Penang Bridge International Marathon (20/11/2011)

﻿ The race started at 7.30am from Capsquare, what fun about the race is the route. We had to run up the KL Tower Hill; going up it was a battle as the hill steep but going down was a different story. Almost everyone got a huge smile going down the hill, I know I had one.
As for the race event, it was small compared to other races I had participated but it was well organised. No long que for anything, they had food and lucky draw grand prize was a Laptop and Ipad 2.

This race restore my excitement in running which I loss some a few months before Raya. A huge reason behind this was someone close to me said he sees no fun in running and finishing a run. He can't understand why I am running and writing about running; his exact word was "nothing special in running". Well I can't change his mind. The important thing is, right now I like running. I don't know if I will be doing it in 5 years time so for the time being this blog will continue to be about my running escapes.... So up yours!

Posted by Suria Zainuddin at 1:45 AM No comments:

Anyway for the Shape Night Run I clock at 1hr 49 min for 12k, got the time from the organiser website. Am thinking of the Penang Bridge International Marathon which I will be running 21k . I probably finish within 3+hrs. Hopefully there will still be people around...


Posted by Suria Zainuddin at 9:27 PM No comments:

Suria Zainuddin
This year I decided to be a runner